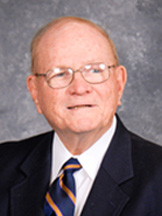 The memorial scholarship honoring the life of Jim, who died on February 3, 2014, has been created at the Vincennes University Foundation.  It will provide funds for a Sigma Pi Fraternity member currently studying at VU.

“Jim Hills was one of the most dedicated members of Sigma Pi I have ever had the honor to meet,” states Brian C. Alley, Alpha Alumni Association President.  “Throughout his 60 plus year involvement with Sigma Pi, both international and locally with the Alpha Chapter at Vincennes University, he brought guidance, laughs and joy to the lives of hundreds of young men.  Jim was a brother, mentor, and close friend to many.  He will be dearly missed.”

While Hills was a student at the University of Maryland in 1948, he joined Sigma Pi Fraternity.  This, in turn, launched his 66-year relationship with the Fraternity, serving on both a local and international level.  He was a Founding Father of the Alpha-Chi Chapter of Sigma Pi at the University of Maryland and served as the Chapter Sage (President).  From 1954 to 1971, Hills held national positions as Field Representative, Executive Assistant and Executive Secretary with the Fraternity.

As Executive Secretary, in 1963, he supervised the move of the Sigma Pi Executive Office from Elizabeth, New Jersey to Vincennes, Indiana.  In 1965, Hills also played a role in re-establishing the Fraternity’s mother chapter, Alpha, at Vincennes University after a 55 year hiatus.  In the late 1980’s, he was part of a group that was instrumental in the construction of the current chapter house of the Alpha Chapter, as well as raising the funds and building the Sigma Pi Clock Tower on the VU campus, which commemorates the centennial of the Fraternity’s founding.  The street behind the chapter house is named in Hills’ honor.

The scholarship recipient will be a member of the Sigma Pi Fraternity and a current Vincennes University student.  The scholarship will be awarded annually to either a traditional or non-traditional, part-time or full-time student at the Vincennes campus majoring in any field.

“This scholarship, in memory and honor of Jim, is a positive reflection upon his dedication to Sigma Pi Fraternity, to the generations of fraternity brothers he influenced and to his commitment to higher education,” stated Bumper Hostetler, president of the Vincennes University Foundation.  “We are grateful to the members of Sigma Pi Fraternity Alumni Association - Alpha Chapter and Jim's family for their efforts and support in establishing this scholarship to recognize the many years of service given by one of the most respected Sigma Pi brothers.”