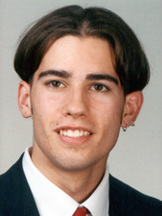 While at VU, Donnoe became an active member of the Alpha Chapter of Sigma Pi Fraternity.  During his time in the Chapter, Brother Donnoe sat on the Executive Council as the Chapter’s Treasurer.

Other achievements included his membership in the Phi Theta Kappa Honor Society, as well as being the recipient of the Outstanding Academic Achievement Award from the Vincennes University Greek Council in 1998.

After graduating from Vincennes, Brother Donnoe continued his education at Indiana University where he majored in Psychology and graduated in December 2000 with honors.

Sadly, Brother Ryan M. Donnoe passed away to the Adytum on High on September 8, 2005 due to unforeseen complications brought on by pneumonia.

His commitment to academic excellence was inspiring and his loyalty and dedication to Sigma Pi made Brother Donnoe a role model with the Fraternity.  He loved his family and enjoyed spending time with them on family trips and vacations and during the holidays.  He was an outstanding musician, lyricist, and vocalist and was apart of two bands during his time in Bloomington.

Brother Donnoe had a tremendous pride in his affiliation with Sigma Pi and a bond with his fraternity brothers that lasted until his passing.

The Ryan M. Donnoe Memorial Scholarship has been created to honor the life Brother Donnoe and his dedication to Sigma Pi and academic excellence.

To donate to the Ryan M. Donnoe Memorial Scholarship, please click below and select the last option 'An existing Scholarship or College Fund'.  From here, you can search for "Donnoe".

donate now
Please visit the Ryan M. Donnoe Memorial Scholarship Facebook page for news, updates, and stories showing how you are helping to change the life of a deserving student.  We couldn’t do it without you!